Arka Mediaworks at the National Awards 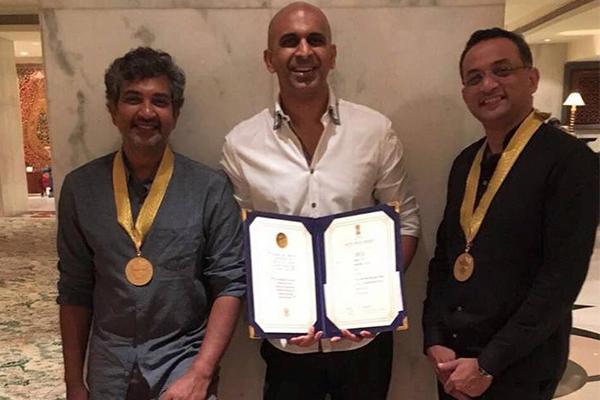 A lot of effort goes into making movies. Turning a mere idea into an interesting story-line and finally implementing it – involves a lot of blood and sweat of those passionate, to turn their dream into a reality.

After all the hard work, a positive feedback from the audiences and critics, is what every filmmaker works for.

Amongst the various awards and recognition a film can receive, the most prominent and prestigious of the lot is a National Award. The National Film Awards hold the distinction of awarding merit to the best of Indian cinema. This prestigious award helps recognizing those movies which are pushing the boundaries and setting a new benchmark.

2015 was a year of many such concepts in Indian Cinema. Movies with out of the box concepts, strong messages, outstanding visuals, etc.

Arka Mediaworks is proud to be associated with one such movie – Baahubali – The Beginning, which was not only appreciated by both the audiences and the critics, but also shattered box office records.

This year, The National Award for the Best Feature Film 2015, The Golden Lotus, was awarded to Baahubali : The Beginning.

It was indeed a proud moment for the entire Film Industry, this is the very first time a Telugu movie has ever won in this category!

Baahubali – The Beginning also won the National Award for The Best Special Effects 2015. This is the second time a film made by S.S. Rajamouli bagged an award in this category! Eega won it in 2013!

We express our deep gratitude to the Directorate of Film Festivals for this recognition.

We would also like to congratulate all the winners and nominees from the other categories. Congrats!

A big shout out to all the movie makers and movies that touch our heart, awakens our vision and changes the way we see things.
Let’s all dream and make it happen!